I would like to start the intuitive introduction to machine intelligence by looking at the term data. Let us try to gain an informal but sufficient understanding of how we could define data.

Big data, data mining, data analysis, data, data, data - everyone wants data. But what is data? The philosophical answer could be: information. The data scientist’s answer would probably be: a bunch of numbers. Indeed, we are going to stick to the latter definition, namely that data is everything that can be encoded by numbers [1].

Some examples: a picture you have taken with your digital camera is data. You can look at it, see the things depicted on it. But your digital camera uses numbers to store the pictures. Also the MP3 sound file that your are currently listening to is data. Even this text here is data! So how is data numbers?

Let’s look at the concrete example of a picture: 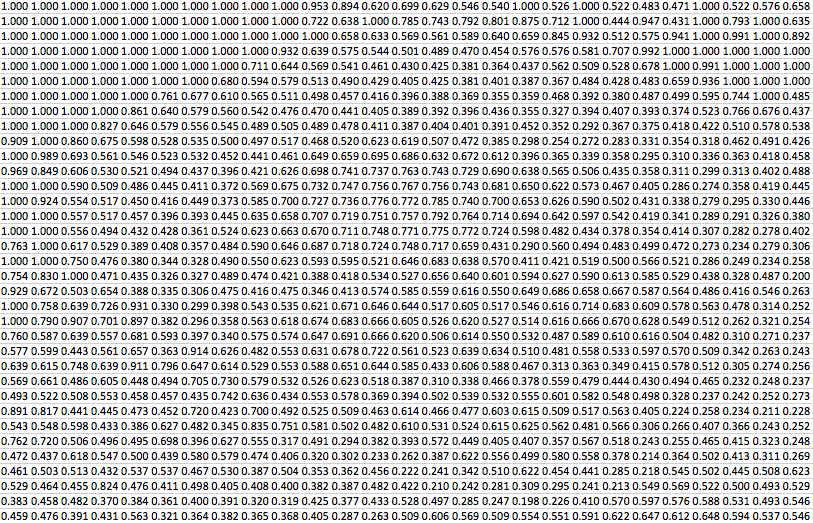 What do we see here? It’s a picture of my face of course! Ok, if you don’t see it you should definitely watch The Matrix more often. In case that doesn’t work, how do we get the picture back? The trick is that I have taken the gray scale picture of my face and replaced every dot in the original picture with a number between 0 and 1 where 0 means “black” and 1 means “white”, and the numbers inbetween represent the different shades of gray between these black and white tones. When showing the image on the screen the computer translates these numbers back to gray values.

Data is numbers + what + encoding

However, the way how I have chosen the numbers to substitute gray values in the picture is entirely arbitrary. We could have done the same by representing black with 0.5 and white with 12, reverse the order, or even mix up the order of the numbers, etc. The way how you choose the numbers is completely up to you. But it is very important to know that: somebody else will not know how to make sense of the numbers unless you tell her that it is a picture and which numbers correspond to which gray scale. The latter information, of how to translate gray scale values to numbers and back is what we call the representation, and is also sometimes called the encoding of the data.

What about the sound file example? This one is a bit more tricky. You have to know quite a lot about the physics of sound. Let’s take a 10 seconds sound file. The easy way to think about how to encode sound by numbers is to divide the 10 seconds a sound file into say 10000 equally sized parts à 1 millisecond and assign a number to each part. Every number corresponds to the “loudness” of a part. That’s basically it! You might wonder now how a human voice, a guitar and the engine of a car can all be broken done to these few numbers. Well, it’s really just that! The real “magic” is happening in your brain which collects these pieces of information and generates a certain sensation which you identify as an opera singer or Jimi Hendrix playing his guitar. If you want to learn more about these things I recommend you to look into this book [2] which does a great job at explaining what sound and music really is and how the brain comes at perceiving it the way it is.

What is finally left is the text example. This one is easy, too. I leave it as an exercise to you to think of how to encode or represent text as numbers. (A hint: think about how many different letters and characters we have in our alphabet).

To summarize, we have learned that data is numbers plus information about what these numbers mean, called the representation or encoding.

As a final remark, I cannot overemphasize how crucial the representation of data is. The representation of a problem can drastically influence the ability to solve it (as exemplified very well in [3]), and corresponds directly to the question of how to represent data. Lots of the stuff you will read about in future articles deals with transforming numbers from one representation into another. In the next article we will come up with an interesting way of looking at data in order to extract information from it.